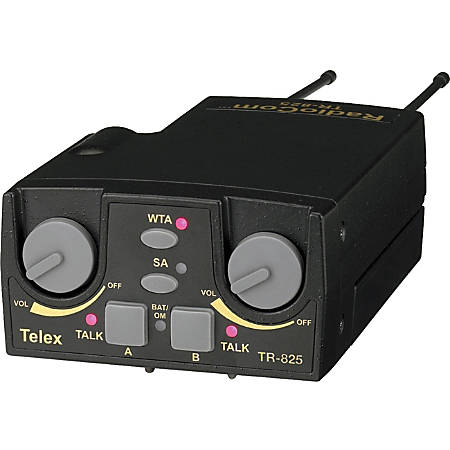 Wireless Talk Around (WTA)
When pressed, the user's audio is disconnected from the wired intercom, auxiliary input/output and the base station's local headset. Other beltpack users, on that audio channel, can hear the user as normal.

Stage Announce (SA)
When pressed, the user's audio is routed to the stage announce connector on the back of the base station. The user also loses their sidetone as an indication that stage announce is activated. The other wireless beltpacks and wired users do not hear the user's audio. The button is non-latching and activates the nearby red LED.

Audio Channel Select Button
Allows user to select either audio channel A or B.

Talk Light
LED is on when the talk button, SA or WTA is active.

Talk Button
Press to enable the audio path from the local headset microphone. The "TALK" LED, #6, will turn red when enabled. A quick press and release latches the talk function, unless latching has been disabled. Holding the button for over Â½ a second will cause the audio path to be enabled only for as long as the button is held. If the talk function is latched on, pressing the talk button again will turn it off.