15% off your qualifying reg. priced purchase Shop now | 30% Back in Rewards on ALL ink & toner Shop now

The COVID-19 pandemic has created a new workforce. Many jobs became remote. Many workers were faced with difficulties adapting to this new normal, however. One growing pain, in particular –learning how to use new technologies for work –has been around well before COVID-19. But the massive influx of remote workers has placed an unusually heavy emphasis on its importance.

Before the pandemic and now, how do employees typically adjust to new workplace technologies? Are they ready and willing to learn? Do employers see things the same way, or are they having their own learning issues? We spoke to more than 1,000 currently employed people in the U.S. to answer these questions and more. Keep scrolling to see what we found.

Technology can be a pretty broad term. So, for this study, we defined technology as any "hardware, software, programs, or tools that require time to learn." Of these individual technologies, the average employee found themselves using 10 different ones as part of their regular job responsibilities; six were digital (software, apps, platforms), while four were physical (hardware, mobile devices, tools). 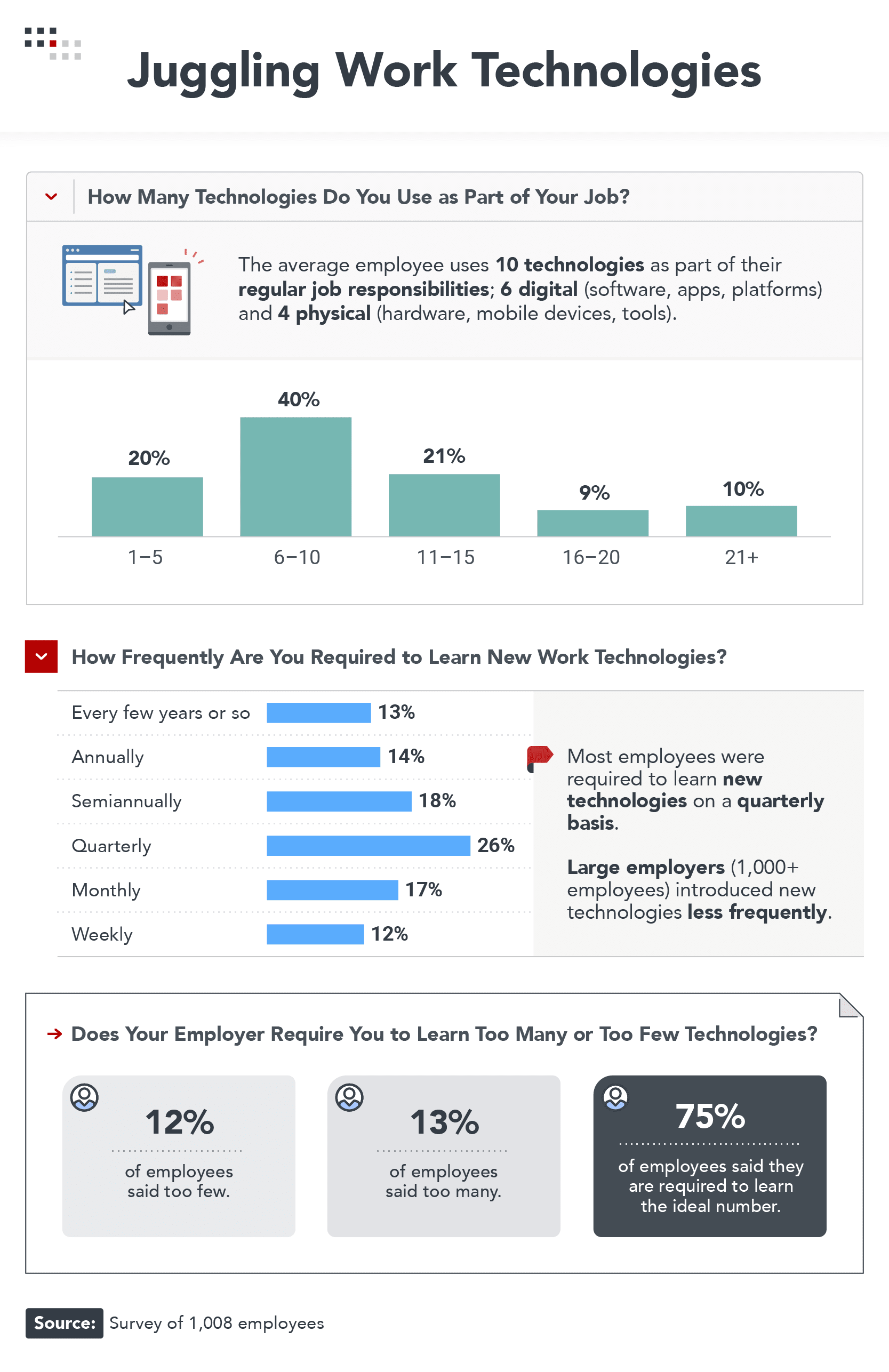 Larger companies may lack the ability to help their workforces adapt: Our study showed they rolled out new technologies less frequently than their smaller counterparts. Most employees, however, felt they were required to learn just the ideal number and didn't feel burdened by the frequency of adapting. 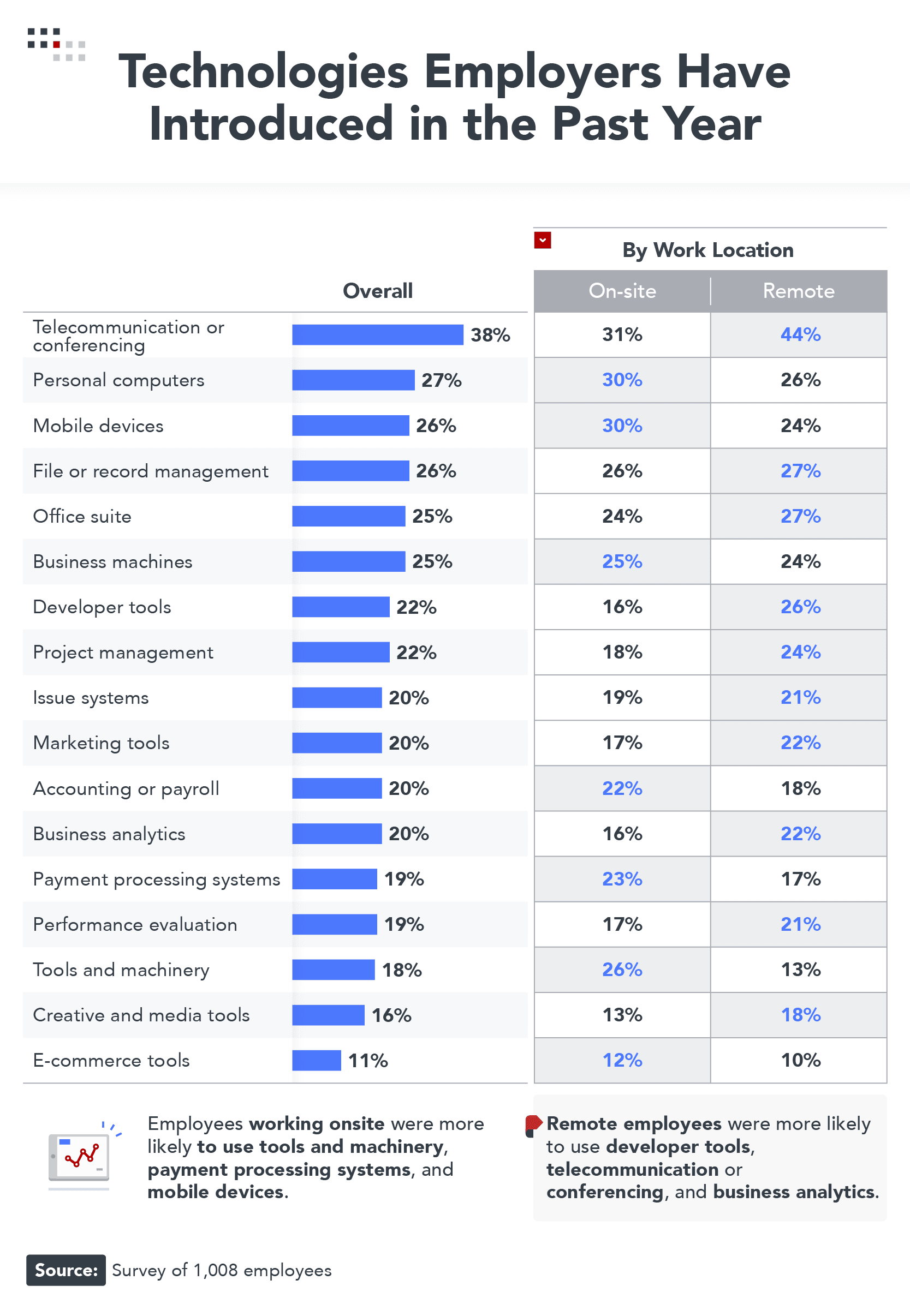 In the past year, more than a third of employees had to learn how to incorporate telecommunication or conferencing technology into their workflow. In our study, remote workers were even more likely to have to adapt to this type of technology. If you find yourself in this group, experts suggest taking time to set your "scene" before hopping on a video conference call, as well as continuing to use the same body language and hand gestures as you would in a traditional conversation.

Ahead of the Technology Curve 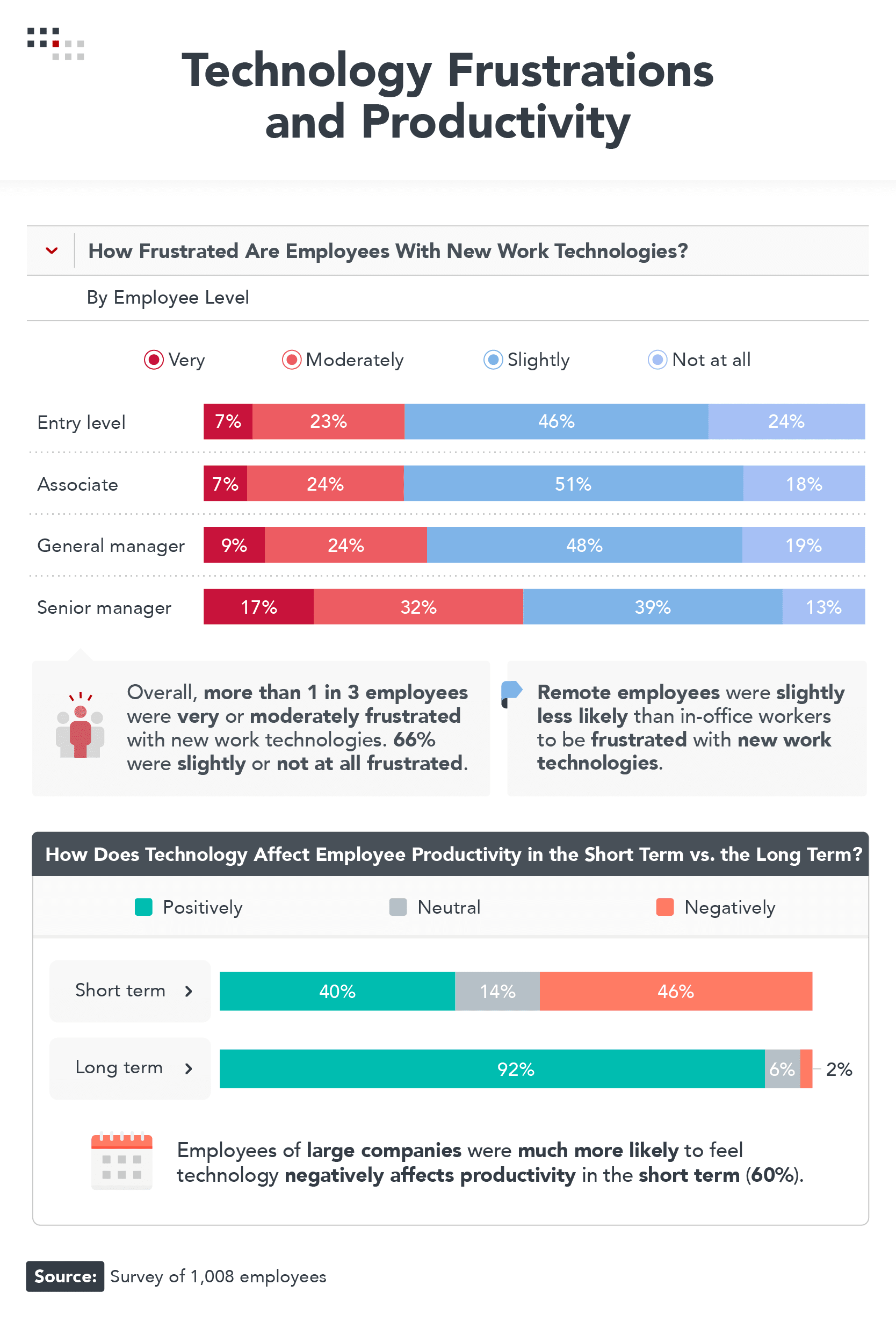 Employees had a generally positive attitude when adapting to new workplace technologies. Even entry- and associate-level employees were rarely frustrated when their positions required additional learning. It was actually senior managers who demonstrated a shorter fuse: 49% of senior managers experienced moderate-to-high levels of frustration with new technologies, compared to just 30% of entry-level workers. Perhaps senior managers tend to be older and are less familiar with current technologies. Or maybe they have more on their plates, and an additional learning requirement feels particularly frustrating.

Despite the mild to severe frustration that comes with adapting to new technologies, most employees understood that its long-term benefits are well worth it. Ninety-two percent agreed that, in the long-term, technology would positively impact employee productivity. This number dropped to just 40% for the short-term, however, and for people at larger companies, the short-term was seen to be even more negative for employee productivity. 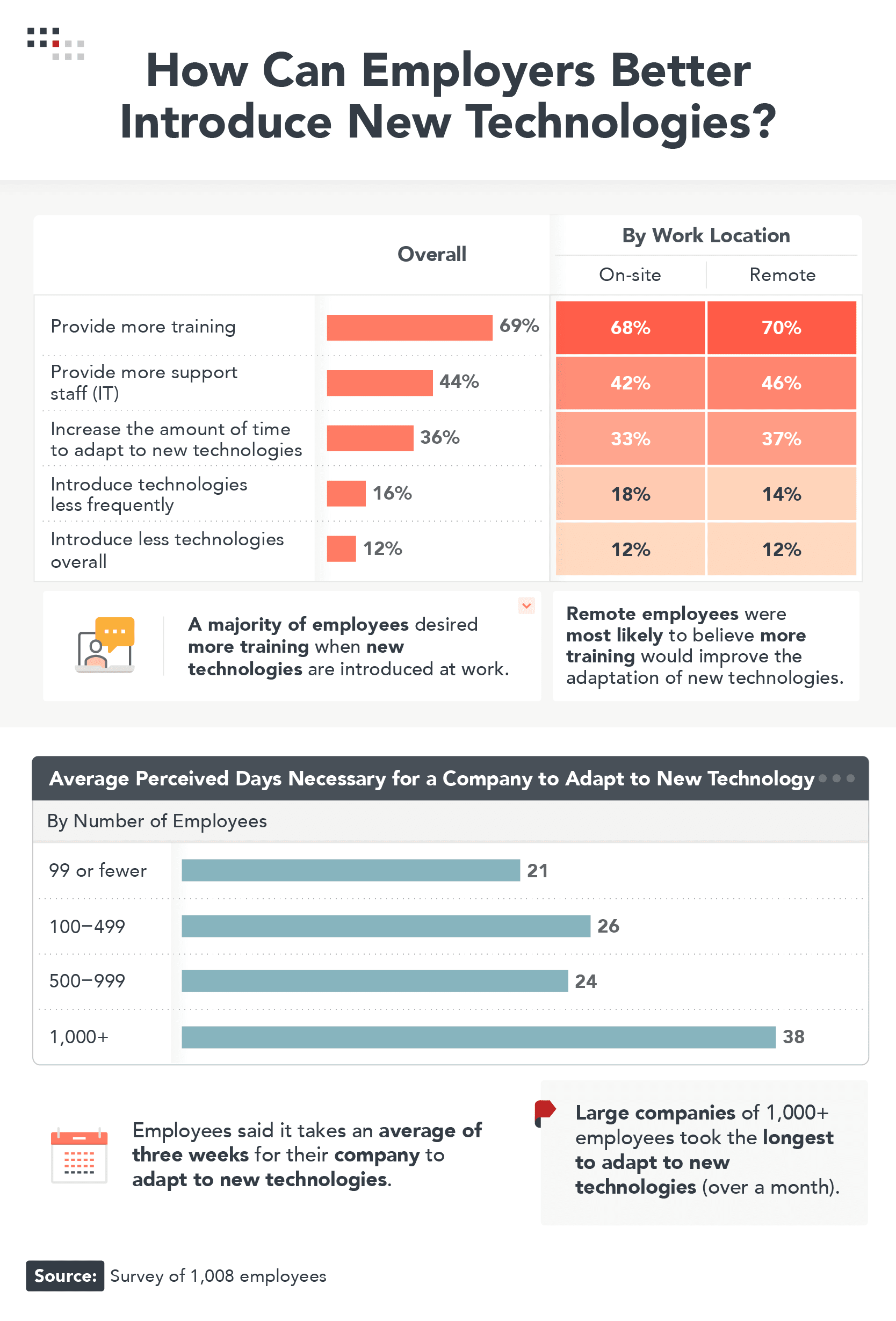 Since we were speaking to employees who had to adapt to new workplace technologies, we figured we would pinpoint the best ways to navigate the technological newness. Most employees said they wanted more training (69%) and IT support (44%) to ease the transition. This type of hands-on education was even more desired by those working remotely who may feel an additional pull toward making connections.

Another 36% of employees expressed an interest in having more time to learn and adapt when new technologies came into the workplace. On average, employees said it took their company an average of three weeks to adapt, with larger companies taking even longer. Experts suggest breaking up the learning into small, methodical steps or incentivizing technology use with rewards. 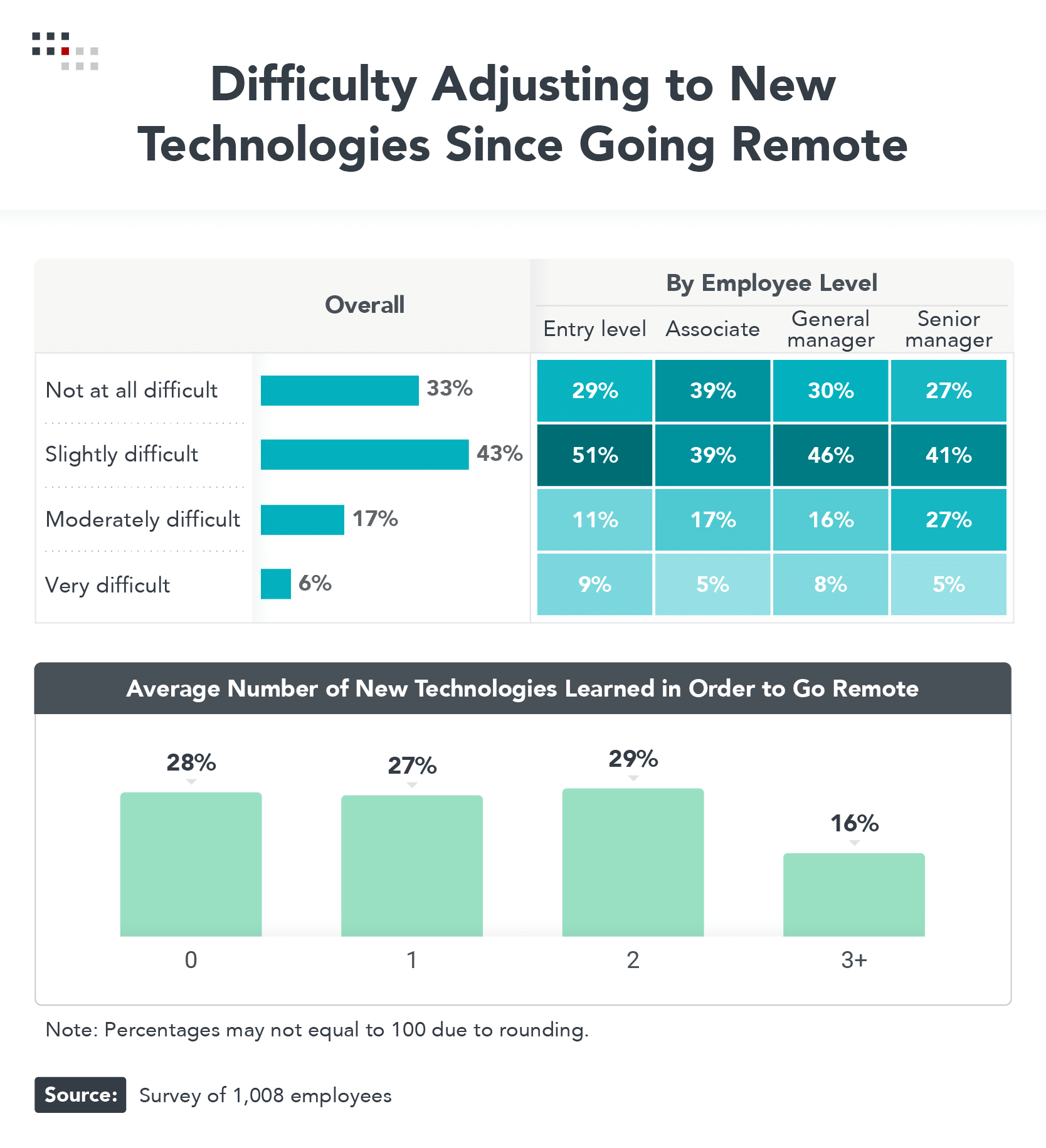 We concluded our study with a look at the different technologies people have had to learn since the outbreak of COVID-19. Talking to only those who switched to remote work during the pandemic, we asked how the transition from the office went.

Most found the adjustment to new technologies "slightly difficult," but very rarely were there severe difficulties. Entry- and associate-level employees did seem to have a slightly harder time learning the new ropes.

On average, newly remote workers had to learn quite a few new pieces of technology. Twenty-seven percent had to learn at least one new piece, 29% had to adapt to two pieces, and 16% had to learn how to use three or more new technologies.

Even though respondents expressed some difficulty adapting to new technologies, they were overall understanding of their company's long-term goals. Employees' attitudes toward new technologies were largely positive, although supervisors and more experienced employees struggled more. However, difficulty learning something shouldn't be the primary reason to stop a new endeavor.

If you are interested in adopting new technologies to improve your workplace or performance, Office Depot is the perfect place to start. No matter the size of your company, Office Depot and CompuCom offer a wide-array of technology services and solutions, from 24/7 remote tech support to enterprise managed workspace services, to help you stay connect and keep your business running.

In this study, we surveyed 1,008 people in the United States who were actively employed. The survey included questions about employees' perceptions and experiences with adapting to new technology in the workplace. All responses were collected on April 1, 2020.

Helping the workforce is important in any economy. If you know someone who could benefit from the data presented here, you can share this study for any noncommercial reuse. However, we ask that you link back to the original analysis so that readers can review it in its entirety and view the methodology. This also gives our authors credit for their work.