Up to 20% Back in Rewards on select PC's & Monitors Shop now | 20% off qualifying reg. priced purchase Apply coupon
Home  /  Find Solutions  /  Inadequate Tech in the Workplace

Tech issues can be pretty unbearable, especially in the workplace. As the number of remote workers continues to escalate, the scope and impact of technology interruptions continue to grow as well. Employees are having to resolve their own issues, maintain their own tech, and even purchase some of their own work devices.

We recently spoke to over 1,000 people employed in the U.S. to better understand the influence of outdated tech in the workplace. Respondents told us how they funded their current technology needs, which issues are plaguing them the most, and how their particular habits ultimately influenced their productivity and happiness. Keep reading to see if your own approach to tech is really working.

To begin understanding employee experiences with their technology at work, we asked our survey respondents to share their top tech uses and needs, as well as whether or not they funded that tech purchase on their own. 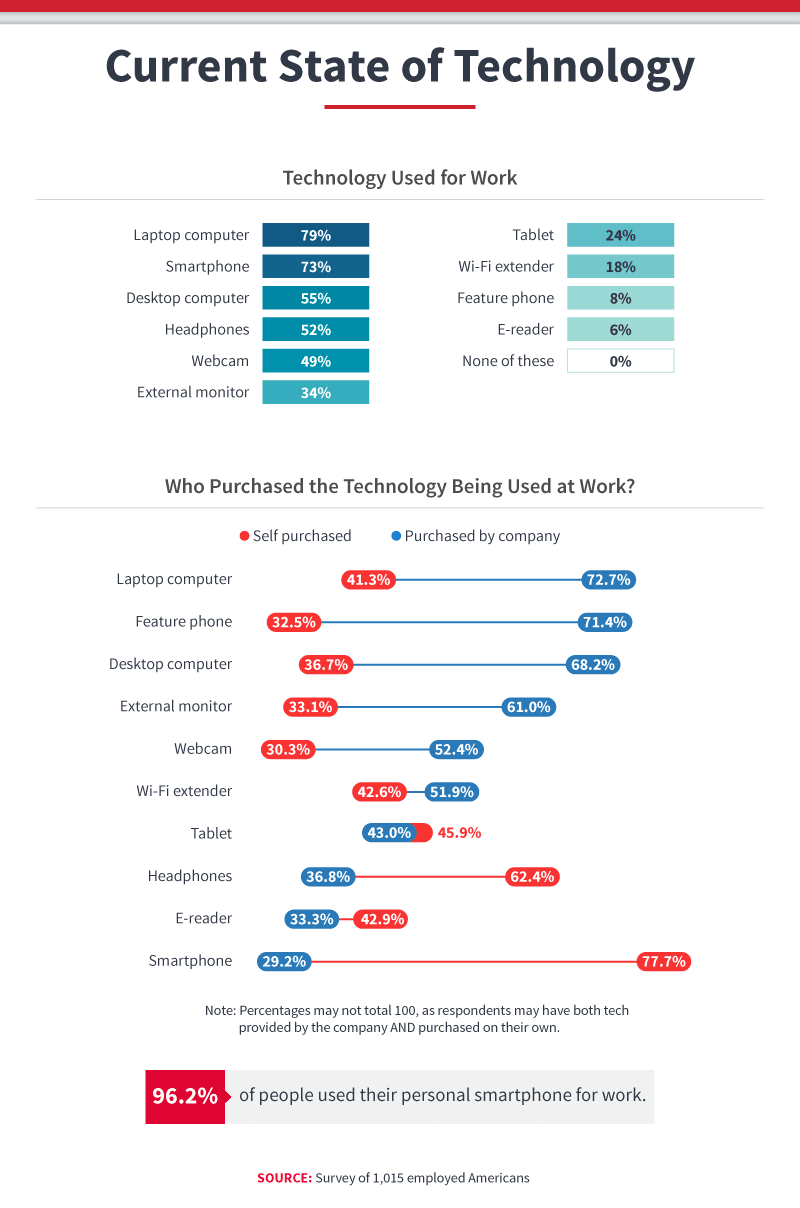 People mostly worked from their laptops, desktops, and smartphones and occasionally with an extra monitor. With the exception of smartphones, all of these items, as well as web cameras and Wi-Fi extenders, were more frequently bought by employers than employees. The financial responsibility for smartphones, e-readers, tablets, and headphones, however, went to the employee, even when used for work. 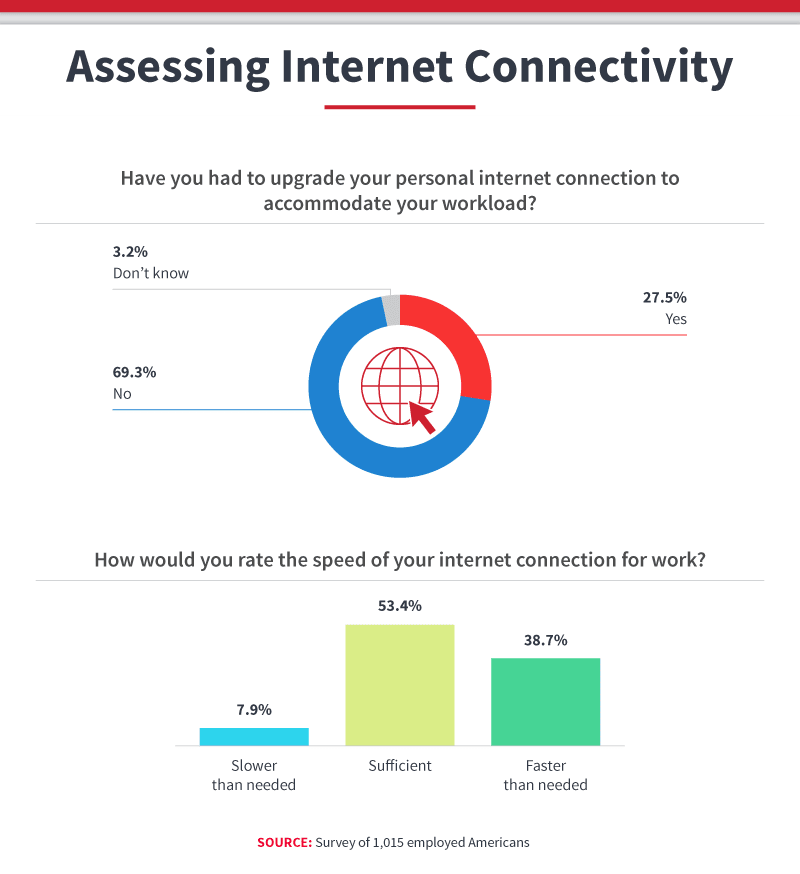 More than a quarter of respondents — exactly 27.5% —shared that they had to upgrade their internet connections to accommodate their workloads. Bear in mind that their workloads likely increased, which has been a common trend throughout the pandemic. An additional 7.9% said their internet service was still currently slower than they needed to get the job done.

Wielding broken technology is a frustrating endeavor, but a common one. However, the ways in which technology breaks are diverse and differ depending on the device. The most common issue with tech is also the least preventable — time gone by. Technology evolves quickly, as do the needs of the workplace. Age of the device was the number one reason employees said the device didn't work properly. Other highly common errors, however, like spilling food and drinks on tech, still did a lot of damage and are much more preventable. 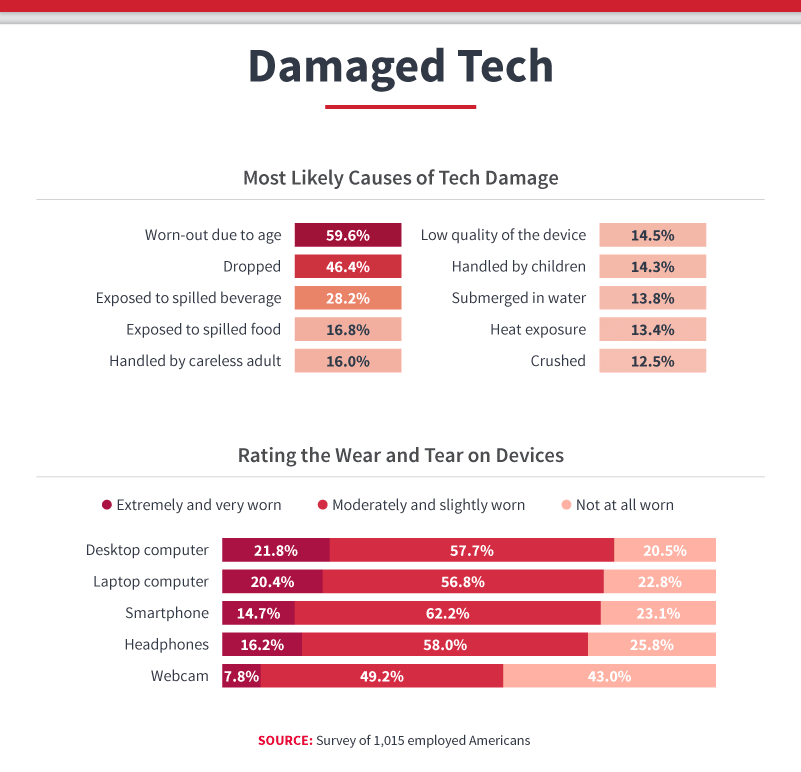 As could be expected, the hardware most likely to show signs of wear and tear were respondent's desktop and laptop computers, with over 75% reporting these devices at least slightly worn. About 3 in 20 respondents also noted their headphones were showing signs of heavy wear and tear, possibly a consequence of many employees working in new or remote environments.

When we asked whether employees thought their companies would help them out with new tech, the most common answer was "not at all likely." Most felt their outdated or soiled tech was going to have to be replaced on their own dime. We found that information services was the industry that was most likely to spend on work-related tech, funded evenly by both employees and employers.

Next, we wanted to find out how technological challenges and frustrations were impacting people's lives more profoundly, like their sense of support, their job satisfaction, or their desire to seek new employment.

Technology frustration was strongly linked with an employee's desire to quit their job and search for a new one. And tech frustration can come on quick —it's been researched that many people will only wait two seconds for a new page to load. We're now seeing how similar frustrations may play out in the workplace. Evidently, tech frustrations make employees actively want to leave their jobs.

Job satisfaction and productivity for those who stayed was unfortunately rattled when tech issues came about. Essentially, being frustrated by tech led to burnout, which led to lower job satisfaction and, ultimately, to a new job. Employers would do well to consider the dramatic impact of broken technology on a team member.

Lastly, we wanted to consider the bottom line. Would it be financially sound for a company to invest in new tech on their employees' behalf? We tried to answer this question by looking at the number of people who heavily relied on tech; how productive their technological proficiency made them at their jobs; and how many hours they wasted each week specifically due to technology frustrations.

Almost everybody agreed that they relied on technology to perform their work. It's basically an essential in the modern workplace. Just 3.8% of our respondents can claim they don't need it. Employees who had technology and actually became proficient in its use were much more often considered to be extremely proficient in their overall jobs as well.

Serious time was wasted when tech wasn't functioning properly. Nineteen percent of those who work on-site reported dealing with tech issues for two hours every single week. When on-site workers also worked remotely, they became even more likely to waste two hours on tech problems, as hybrid workers - who made up 37% of our sample - reported losing the most time to tech issues weekly.

The evidence makes it clear that having updated, functional technology in the home can seriously impact your day-to-day experience on the job as well as your overall career. Employees with working tech that they knew how to use were much more likely to want to keep working at a company and to be good at their jobs.

Whether your employer can support your technology needs or not, you can boost your own happiness and capabilities on the job with new tech or tech accessories. Office Depot has tech solutions for your office life, from new computer setup and 24/7 remote tech support to computer repair and tech trade ups. If you could use an improvement in the way you work, head to Office Depot today to see how we can help.

We collected 1,015 responses of employed Americans from Amazon Mechanical Turk. 55% of our participants identified as men, 44% identified as women, and roughly 1% identified as nonbinary or nonconforming. Participants ranged in age from 19 to 84 with a mean of 39 and a standard deviation of 10.9. The sample sizes of on-site workers, hybrid workers, and remote workers were 19%, 37%, and 44%, respectively. Those who reported no current employment or who failed an attention-check question were disqualified.

The data we are presenting rely on self-report. There are many issues with self-reported data. These issues include, but are not limited to, the following: selective memory, telescoping, attribution, and exaggeration.

No statistical testing was performed, so the claims listed above are based on means alone. As such, this content is purely exploratory and future research should approach this topic in a more rigorous way.

Technology needs are ubiquitous. If you'd like to share this tech research with someone else, you are free to do so. Just be sure your purposes are noncommercial and that you link back to this page.